My Ministry is Better Than Your Ministry! 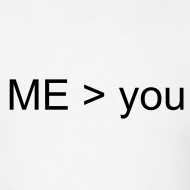 This week, I witnessed some Christians doing some things that got me a bit disgruntled. I didn't say anything to them about it because I don't really like it when people offer unsolicited opinions in social networking land. However, upon further reflection I think this is something that should be discussed. The situation in question involved a person who posted a picture of a Christian event they were attending. The caption read, "This is what I did...what did you do?" This rubbed me the wrong way because I believe there is an underlying pride and snootiness amongst some Christians in regards to what they do or which church they attend. Perhaps it is one Christian talking about what their church did only to be met by another saying, "That's so nice! This is what we did..." While it would be great if believers could simply share the good things they are a part of, things like this usually turn into a contest over who's steeple is bigger.

This can also happen in regards to Christian rallies. I have even dealt with this first hand when working with missionaries. Somehow holding a dodgeball tournament for teens in Istanbul is better than offering the same tournament for teens in the gym down the road. World missions is fantastic and very much needed, but not at the expense of reaching out to our own communities. One isn't better than the other. Telling everyone about your group's rallies can be a good thing and really fire up a community, but it's all about the heart and motivation behind it. All too often the message being sent is: "Because we prayed louder and with a larger crowd we are better than you and doing more for God." Honestly, I have always wondered how large prayer events in public places reconcile themselves to Matthew 6:5 which states, "And when you pray, do not be like the hypocrites, for they love to pray standing in the synagogues and on the street corners to be seen by others. Truly I tell you, they have received their reward in full." But, I digress. My concern is that when we, as churches or individuals, make these kind of boastful statements, we minimize what other believers are doing.

I love Christian music...or should I say "did" love Christian music. Over the last decade and especially over the past few years there has been a heavy and unspoken competition between Christian singers and bands. I believe this has been brought on by the Christian music scene having a "Top 20 Countdown" each week on the radio and is further encouraged by the Christian publications that promote this as well. This kind of competition within the body of Christ can be very harmful and may even discourage some people from ever trying anything at all. People are left feeling like they could never measure up to the supposed greatness they see around them. To them, their efforts seem worthless. This is not the case at all!


Colossians 3:23 states, "Whatever you do, work at it with all your heart, as working for the Lord, not for human masters." Churches should never compare or compete with each other. This is also true on an individual level. What you do for God should never be used as a weapon against someone else. You not only diminish what you are doing but also discourage other believers from stepping out as well. Turning living a life that is pleasing to a God into a means of placing yourself above other people is not only foolish, it stops you from doing the very thing you set out to do in the first place. So what had I been doing that day the person posted a picture of themselves at a big church event? I spent one-on-one time with my spouse. I suppose it's not something people would usually brag about, but I think the Lord smiled on that just as much.
Posted by Bob Adams at 9:52 AM