Living in Bondage to the Gospel 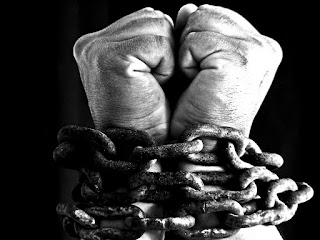 Have you looked around in Christianity and asked the simple question “how can you live in bondage to something so freeing?” It really sounds like an odd question doesn’t it? This gospel message that we were given is something to be light and non-burdensome. When Jesus talks about taking his yoke upon us...he is literally referring to his teaching.

If something is so incredibly freeing then why do so many people live in bondage to it? You do not have to look far on Facebook before you see someone posting over and over again cliche quotes, catchy statements and scripture after scripture. What is amazingly true is the fact when you look back at all this person has posted...many of the things contradict one another. It’s as if the person making all the postings simply has no thought of his/her own. At least this is what I thought until I engaged one person in conversation.

What came out in our conversation was the fact they once lived an extreme life. When coming into the Christian scene they now live another extreme life. This made it very hard for them to find a middle ground where the true gospel is. Instead they are bound by legalism and some scripture that have nothing to do with us today. This can lead to burn out and depression rather than joy and life to the fullest as we walk in grace. It was later revealed that they did not know what to believe on some things so rather than potentially putting their own thought out there, they will stick to reposting other peoples thoughts. To put their own thoughts out there for the public to read could result in severe correction.

It really is a sad thing when we can no longer be free in Christ to do or believe things that may cut counter to popular Christian culture. This is how we grow and quite honestly when I see someone posting catchy quote after catchy quote...I begin to wonder. When a person only posts scripture...I want to ask...what are your thoughts? I want to hear those! It really is possible to live free.
Posted by Bob Adams at 8:33 PM