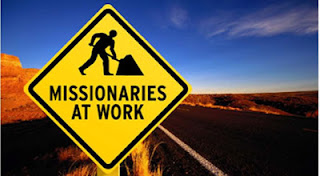 This afternoon I had the pleasure of meeting with a missionary friend for lunch. While enjoying some good conversation and catching up I was asked the inevitable question “What have you seen that catches your eye that missionaries are doing?” Sometimes I am even asked what I might do to get peoples attention or raise funds if I became a missionary. First of all, I responded by saying you need a social network presence. For me, it would be Facebook. If I had to raise funds however...this is how I would do it. This is a freebie.

Kickstarter.com is one way to do some serious fundraising in a short amount of time. I am quite shocked that I have not seen this being used by missionaries to raise funds these days. If you are not familiar with this website you really ought to visit it. It provides a funding platform for those wishing to raise money towards a goal. According to “Kickstarter”...

”Thousands of creative projects are funding on Kickstarter at any given moment. Each project is independently created and crafted by the person behind it. The filmmakers, musicians, artists, and designers you see on Kickstarter have complete control and responsibility over their projects. They spend weeks building their project pages, shooting their videos, and brainstorming what rewards to offer backers. When they're ready, creators launch their project and share it with their community.
Every project creator sets their project's funding goal and deadline. If people like the project, they can pledge money to make it happen. If the project succeeds in reaching its funding goal, all backers' credit cards are charged when time expires. If the project falls short, no one is charged. Funding on Kickstarter is all-or-nothing.”
It really is quite an extrordinary concept. I have this seen this most successfully used with many Christian bands wanting to put out a new CD. These groups will set a financial goal of lets say 15,000 dollars for their project. Next they will set the timeline for raising the funds which usually is about 30 days. They will record a video to play on their intro page and also set rewards for those donating. An example of a goal would be $50 you get the new album. If you give $200 you will receive a t-shirt and CD. If you give $1000 you will get your name mentioned in the CD cover and meet the band. On and on it goes with some of the biggest goals being a private concert. I have seen many bands hit their mark. The same applies for artists, etc.
Needless to say after seeing these results and personally knowing a few artists who have successfully hit their goals it got me thinking about “What if I was a missionary? How could I leverage this powerful website?” Their website states...
“We allow creative projects in the worlds of Art, Comics, Dance, Design, Fashion, Film, Food, Games, Music, Photography, Publishing, Technology, and Theater.
Everything on Kickstarter must be a project. A project has a clear goal, like making an album, a book, or a work of art. A project will eventually be completed, and something will be produced by it."
I am quite confident that as a missionary one could easily come up with a project out of all they are endeavoring to accomplish. Perhaps if a missionary could not define what that project was they could simply look at the examples on the website and make something happen. What I would do personally is set a monetary goal as the amount needed for a year on the field. Say that amount is $18,000, then I would post that to be reached within 30 days. Next I would put in place the reward levels. If someone gave $10 they would get a personal letter of thanks. $40 a picture of that donors name written on a board held by a national (wherever I may be going). As we get into bigger money like $100 then I would record a personal video message with a person who speaks the native language while I translate it. Let’s say I am a missionary to Sweden. I am going to assume this is a place that people would like to visit. For me personally, I am of the belief that because seasoned missionaries travel internationally so much that they can become a bit out of touch with those who do not travel much. There are many people have not traveled out of the country...perhaps even out of their own state. With that in mind, I would make a bracket of let’s say $3000 or $4000 dollars. Now the key to reward levels is to give them all of the rewards from the other brackets. With this big donation level I would personally consider a $3000 donation a $2000 donation. Why? Because I would take a thousand of that money and fly the donor out to where I am on the field. Just this morning I checked what a flight would cost from Milwaukee, WI to Stockholm, Sweden...it was $867.00. This would bracket would give the donor a chance to see what that missionary is doing and have a bit of a vacation as well. Personally I would not call it a “missions trip” but rather a vacation with free stay at the missionaries home. Imagine a church with a little cushion saying they will take on a missionary for a year. Perhaps their total giving could come to $3000 and the pastor convinced the missions board to give it all at once via Kickstarter. Do you see where I am going? The missionary gets funded...the church is doing it’s part and pastor gets a free vacation. All he has to do is spring for his wife to go. This is the same concept I used ALL the time in youth ministry. If we did a fundraiser and hit $1000 I would only consider it to be $800 because I have to buy the winner an X-Box 360. The ministry still comes out ahead though.
This is how my mind is always thinking though. If I were a missionary this is how I would roll and see what happens. What would happen if the goal is not met within the 30 day time frame (or whatever time frame you choose)? That is easy. No one is charged and though you do not collect anything, you continue on with what you were doing before. The beauty is that those who give won’t be charged until the deadline day. So if a church/individual did make a donation or thought about it...they would have that full time before it was charged to them.
So...for what it is worth...fundraise away!
Posted by Bob Adams at 2:54 PM