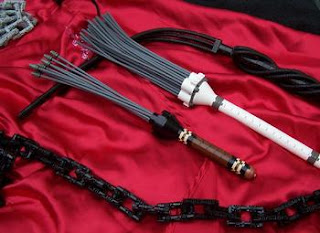 Catchy title isn’t it? Perhaps the title is a bit edgy but none the less true in my opinion. Let me give the definition of masochism according to m-w.com: “the derivation of pleasure from the infliction of physical or mental pain either on others or on oneself.”

I do not plan on going off on a rant about kinkiness or anything like that (I’ll save that for my marriage blog hehe)…rather I want to talk about this movement of people that meets every Sunday in many different buildings they mistakingly call the church. Don't forget...people are the church...not bricks. These are people that think every time they get beat up they are having an encounter with God. If for some reason they do not feel pain then they feel sorely neglected and perhaps made to feel like a major sinner. They enjoy being yelled at the entire message because if they are not hurt by the message than perhaps they did not hear from God.

I ran across a quote today posted to my ministries website (www.thatsnotmygod.com) that said this, “Some of you, God hates you. Some of you, God is sick of you. God is frustrated with you. God is wearied by you. God has suffered long enough with you...He doesn’t care if you compare yourself to someone worse than you; he hates them too. God hates--right now, personally, objectively--hates some of you. He has had enough...YOU are the problem, not the solution....God doesn’t just hate what you do, he hates what you are!”

I will not say who said this because I prefer not to give him the publicity though many already know who it came from. What I find interesting about this quote is that it is not out of the norm for him or others to say this kind of thing and get a rousing “AMEN!” This was stated not in a church of 100 people but rather a church of thousands of people. This almost motivates me to get behind my pulpit….er….um….rocked out music stand and be a complete and total hard-nose lacking in scriptural knowledge. It seems more times than not if you are loud, mean, scripturally challenged and a lacking in grace pastor that you could end up with a large church!

Now this is what I read in the red letters of the Bible. Matthew 11:29 says, “Take my yoke upon you and learn from me, for I am gentle and humble in heart, and you will find rest for your souls.” Now if you are like me you have heard that the “yoke” is something heavy and because Jesus was a carpenter he probably made many heavy yokes. However Torah teachers (Rabbis, ie. Jesus) would teach the accepted interpretations or yoke of their community. Jesus invitation to those who listened to many teachers and interpretations helps establish him as a Rabbi would present an interpretation that was easy and light (to understand not necessarily to do) (Matt. 13:11-30). Therefore, he was probably not speaking to unsaved people bogged down with sin but people unsure of the many interpretations they heard in the great religious debate in Galilee.

However, many times people quote and therefore base their theology on Psalms 5:5 “The arrogant cannot stand in your presence. You hate all who do wrong.” SEE…GOD HATES YOU BECAUSE YOU SIN! Now I believe Psalms to be a very inspiring book of the Bible and would teach from it proudly. However to base a theology off of one of the most emo people in the Bible is probably not the wisest thing in the world to do. There is a simple phrase going on here we are familiar with, it goes like this “you are putting words in my mouth.” Now…imagine God and David sitting down at the great Starbucks in the sky ready to have a little coffee talk (insert Mike Myers Jewish joke here). Do you think God might say to David “um…perhaps you were putting words in my mouth.” In my opinion I think he would.

Sadly each Sunday people come in to buildings and want to be beat down. What is even sadder about this scenario is that people will then mistake a ranting leader at an altar call as having a God experience when in fact God may have left the building. I have been guilty of making some ignorant comments in the heat of the moment. I am leading a youth group again while pastoring a church and as I look at some of the messages I spoke on during the old days of youth pastoring….I have no other choice than to throw them out.

We need to stay educated on the Bible and what it says. So put your latex wear away, leave your whips and chains at home and come to a place where you hear about the red letter Jesus. Will the teachings always be mushy leaving you with a squishy feeling….no…not all the time. The concepts should be easy to understand…perhaps the difficulty is putting it into action. Let me state it this way. A pastor may make it very difficult for people to live out the simple teachings of Christ because they expect change in one meeting at the altar before they leave the building. This is the end result of the Billy Graham generation we live in. "If you don't change RIGHT NOW you have sin issues." What? I think it becomes much easier to put the teachings of Christ into action when we are free to continue on with our journey WORKING OUT our salvation taking things one step at a time. It is true we should work on it and not be lazy but I am pretty sure if you don’t change THAT MOMENT a bus probably won’t hit you on the way home from church.