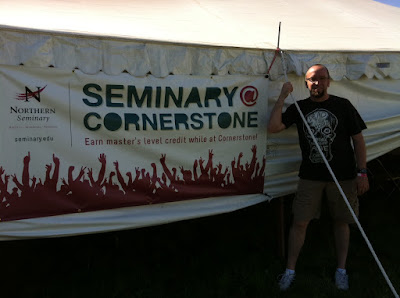 So Tuesday morning rolled around and it was time to pack for Cornerstone 2011 in Marietta/Bushnell, IL. Looking back this was my 6th time making this trek however this time it was different. I went from being an attender to seminar speaker. I must say that filling in for, Pastor Bob Beeman last year at the “Sanctuary” stage really helped.

I find it quite interesting though how things work in Christianity. This trip was met with spiritual roadblocks right up to the day I left however. It is as if God said, “hey, fyi…let me remind you why you are speaking on what you are speaking on really quick.” I got a couple of phone calls, text message and Facebook message from those so engulfed into the institution of church that it got me discouraged. These are not people that I barely know but ones I do. The dagger in the back however was a Facebook message from a person that smashed me and made a sharp personal attack. This was a very discouraging scenario that would cause some to blog for months about. However, it was the extra gas I needed to go and teach with great examples.I did not forget about it however and really tried to let it go.

I remember telling, Tracy on the car ride down that from pastoring a church to speaking in front of a crowd of 5,000 to multiple speaking engagements…this is by far the most intimidating thing I have ever done. There are literally all types of Christians at this event and for some odd reason I am going to teach them. As I pulled up to the tent I would be speaking at it said, “Northern Seminary...Earn Masters Level Credit While at Cornerstone.” I read that and told, Tracy “MASTERS LEVEL!? Well I suppose to some I don’t have the book smarts but sometimes street smarts are far superior.”

It was a mixed time of emotions for me while I was teaching young and old. From board members to pastors to those about to give up on church, God allowed me to speak some life into them. It was quite overwhelming while I talked to people after each class who were going through some pretty heavy things in their life and ministry. I think people got it that there is life in ministry and that it can be the worst of callings but more over it is the best of callings. I was hanging out with Catholic community people, fellow A/G’rs, non-denominationalists, and Christian anarchists from England. It really was a time that I will never forget.

Looking back on the experience I would make a few changes. I suppose I could blame the lashings before I left on the Devil but I really think it was God showing me and confirming for me the need to do this course. It showed me that some people are so wrapped up into how THEY think church ought to be that when they don’t get their way or lose some control they begin to unravel. These things are going to happen when you are part of a non-traditional church. I am SO TIRED of churches functioning in the blah boring kind of ways with politics, policy, etc. that I find great rest in Radiant Fellowship and those who love the church are ready to see something more real and relational.