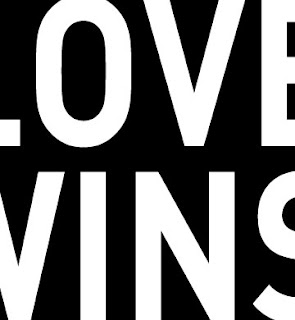 So this will be my last blog about the continuing argument over, Rob Bell’s book “Love Wins”. By the amount of finger pointing going on, the bickering and outright nasty comments about this book….a simple title really does prove to be true. With 14,000+ hits to my blog I don't mind sticking my neck out on the line for a guy I have come to really appreciate with both his books and ministry.

Unless you have been living under a rock you will know that, Rob Bell’s new book has gotten some Christians in an uproar. Let me just clarify that I would prefer not to hear your opinion on the book until you have read it. Now, there are many that are claiming he is a universalist based off the video promo for his book. I personally don’t see it because in Chapter 3: Hell (don't have page reference because I have a Kindle) Rob says, "Do I believe in a literal hell? Of Course."

Now his take on it may differ from yours and to be honest differed from mine slightly. When I hear a new teaching however I am intrigued and will look into it a little deeper because it is very easy for me to turn off my brain to learning new things. The minute I or anyone else does that, we are in trouble. This is not to say we have to accept every teaching under the sun but we must be willing to learn. This is not the point of my blog though.

I wonder how many people firing on, Rob Bell have what others might perceive as a theology that is borderline heresy to other people? How many people that have read (or not read) Robs book that is blasting it is living out a perceived biblical truth that is causing other people to say about you “what a whack job!” To the person who baptizes in the name of the Father, Son and Holy Spirit…those who baptize in, Jesus only are off their rocker (and vice versa). For those who believe the initial physical evidence of the baptism in the Holy Spirit is speaking in tongues for others this may be a gross understanding of this gift. Some that don’t believe the tithe is a New Testament principle according to those that do are not living a blessed life. On and on it goes down this endless rabbit hole.

I don’t know….Jesus says “they will know we are Christians by the love we have for each other” (Bob’s paraphrase). If this is the case…the non-Christian world is thinking we are all a bunch of daft jerks because we are stringing one of our own up. Let me ask you….before you blast, Rob again…what are you doing to make a difference? Are you maintaining a daily walk? Just trying to keep your own life going? If you can make it from day to day you are doing well? If so…in the words of Matt Foley (Motivational Speaker) “WELL, LA-DE-FRICKN’-DA!” Check out, Robs church website or see, Rob in person to see all he is doing to make a difference. A person can bash the guy all he wants but the fact remains he is building wells overseas, making a difference in Grand Rapids, and many other humanitarian projects. The same can be said for, Rick Warren and others. The one conference I went to at “Mars Hill” Rob got up on stage on the last night. He showed a power point image of how many thousands of dollars this conference about the local church brought in. He then said, “this is all being donated to this ministry overseas to build new wells and provide great drinking water in third world countries.” That is what I call being, Jesus with skin on. That is what I read in the bible, “whatever you have done unto the least of these…..”. All of the conferences I have ever been to, not only do you pay a fee to get in but they inevitably have a talk on how far behind budget they are "so can we take an offering to offset the cost of this grossly over exaggerated conference”?

Sometimes those who are doing what we know we should be doing will make a person squirm and even cause jealousy. But that is okay because jealousy is the trophy which makes mediocrity squirm.

Why, Rob Bell? Why all of the attacks? Because he is an easy target but if some of us would publish what we believe to be true about the bible….we would be called all kinds of names as well. Love wins.