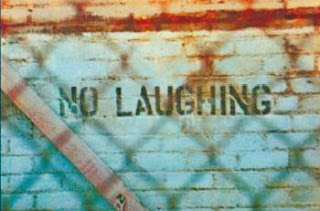 You know what I have always known but probably don’t say a whole lot? I don’t talk about the fact that some Christians really need to loosen up a bit and laugh. For some reason this mentality can creep into Christianity where we cannot joke about some of the doctrines and things we believe that we hold so dear. I cannot tell you how many times I have heard someone or other pastors joke about “laying hands on someone” in a joking manner. If someone is being goofy, how many times have you heard someone say, “you need to respond to an altar call”? The fact of the matter is that when you get a group of pastors together…there is a lot of joking going on about all things church. This does not mean we don’t love what we do or believe any less…it just means we are human and like to laugh.

This no laugh/militant mentality can creep into Christian theology and churches in many different ways. Perhaps you have seen churches that make church out to be the barracks and the Christians “soldiers for Christ” so this militant attitude grows. Men’s ministry can be this way as well…I have known a few mens ministry directors that were very much in your face and even militant about the role of man and what we believe. This really is a huge turn off in my opinion…you have to laugh!

This blog was brought on by a comment I made on Facebook, I said “if I attended a IHOP (International House of Prayer) would it be out of line while someone gives a message in tongues to interpret it as their breakfast order?” I did not make this comment because I have issue with the organization but rather it is called a IHOP! I think the Christian world would be a bit better off if we could just laugh at ourselves a little more.