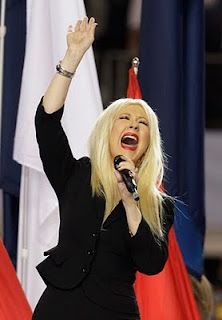 Yesterday was one of the largest sporting events of any season in any sport. It was so exciting to be a Wisconsinite as the Green Bay Packers won the 45th Super Bowl against the Pittsburgh Steelers. Green Bay was all a buzz last night with fireworks and more. Sadly this morning you might hear more about the singing of the national anthem than anything else. Perhaps you might hear a few thoughts about the Super Bowl commercials as well…did you think they were good this year? I think there were a few shining moments.

In regards to the national anthem all you have to do is log into Facebook or do a search for Christina's name and you will more than likely find people destroying her verbally for her version of this beloved song. Today the news reports are saying this was the most watched television show in history. According to Nielson ratings the viewership for Super Bowl 45 was 3% higher than last year's 106.5 million viewers (some are saying 111 million viewers tuned in this year). I cannot imagine the nervousness that would take place in anyone’s life if they had to sing at an event like this. This is a massive audience even for the likes of Christina Aguilera. The thing that set this performance apart from a purposeful mess up (ie. Roseanne Barr, July 25, 1990…Jack Murphy Stadium)is that I am quite sure this was completely an accident. As Christina reached the fourth line of the song, which is "O'er the ramparts we watched were so gallantly streaming," the singer, instead repeated the second line, "What so proudly we hailed at the twilight's last gleaming." In fact when she repeated that line she even changed the lyrics. In a moment of nervousness I am sure many would have derailed completely but she managed to hold it together. Like many of you I had a Super Bowl party and when I heard her sing the song I picked up on it right away. I chose not to say anything but noticed it none the less.

The conversation today is pretty crazy though. When it comes to talking about tactics, motives, teachings, etc I am always up for a good discussion. If that conversation takes a turn towards personal things that is when I find myself struggling with the conversation even though I am guilty of that now and then. I recall the President Barack Obama/Bill O’ Reilly talk before the Super Bowl yesterday and there came a point when Bill was getting personal with his comments/questions. I told Tracy “see…there is no need to get personal in a debate like this.” I am totally fine with debating and not seeing eye to eye but when it gets personal it is over.

So, why would I bring all of this up? A few months ago I did a blog regarding the bashing of Rick Warren, Rob Bell, and Ted Haggard that many pastors and Christians are guilty of. It was the most read blog I ever wrote. I stated in this blog that just because these people are known on an international level does not mean they don't have feelings. They are human beings. I also went on to say that if we are willing to dish out dirt on people, careers, ministries, etc. then we must be willing to take it as well (this is a biblical concept). I know when I have dished it out in the past that it really made it difficult when people dished it right back at me (and that was just a few people!). Can you imagine millions of people now blasting you because you had an "off moment"? Christina has been singing the national anthem at sporting events since she was 7 years old. If you recall she even sang at the NBA finals last year. We are in this new series at church entitled "Love Revolution", yesterday I talked about the scripture in Mark where Jesus says, Love your neighbor as yourself." Are we?

According to www.dallas.sbnation.com today "The Grammy-winning singer released a statement soon after, saying, "I can only hope that everyone could feel my love for this country and that the true spirit of its anthem still came through."