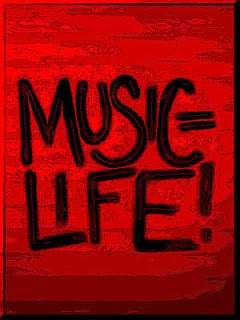 So I was not going to say anything about this but am feeling a bit punchy tonight and thought I would air out my thoughts. I recall being about 18 years old and in youth group. My youth pastor knew I wanted to be a youth pastor someday and let me share a message. Since I was so big into "Christian music" I thought I would talk about "The Dangers of Secular Music." It was the most legalistic/living under the law message anyone probably ever shared on the subject of music. I look back at that message and now understand why no girl in my youth group dated me lol.

St. Augustine once said, "All truth is God's truth." The Apostle Paul in I Corinthians 6:12 says, ""Everything is permissible for me"—but not everything is beneficial. "Everything is permissible for me"—but I will not be mastered by anything." If this is really the truth than why do I always hear it from at least one person when we use "secular" (I hate that term) music to illustrate a point in our church service. I am quite confident in saying that some "secular" music is more Godly than some "Christian" music. For that matter...some secular artists are more Godly than some Christian artists. But, as the way of life goes...people will always tend to judge what they do not know. If I see a kid walking down the street and looks all goth'd out I can assume to know what they are dealing with and judge them OR, I can get to know them better and have a clear understanding.

In a couple of weeks I will be doing a message based off the bible of course, and "The Wall" by Pink Floyd. This is what gets me...people assume that because it is Pink Floyd that it is a vulgar drug band. This could not be further from the truth. Instead of researching the band and trusting the judgment of their pastor on this they think the worse. The fact is that Pink Floyd was anything but a drug band...in fact they kicked the one drug user out, Syd Barrett. I find it interesting though that people who say Pink Floyd is bad are the same ones who will listen to many other artists who turn out garbage and live the lifestyle to go with it.

My favorite are the ones that listen to "Christian music" and would be utterly appalled by the way SOME of these Christian artists conduct themselves at concerts and the Gospel Music Award week in Nashville. Having many friends in the industry you would be shocked to hear of what goes on "behind the scenes." But, because we make assumptions we will continue on our merry way blissfully ignorant. I recall my friend who told me about two groups smoking weed in their hotel room at the GMA's. You see the fact is some "Christian artists" aren't really Christians at all and are strictly in it for the money because they know how to work the Christian crowd. But I digress.

So I will condone Rascall Flats but not Pink Floyd? I will give a big thumbs up to Daughtry but if I have to hear a U2 song I will get upset. It makes no sense in my world. Let me go on one more rant here...I don't condone Metallica but what do you think of "For Whom the Bell Tolls?" What about their song "One"? Some might think of devil music but in fact these songs are based off a book and a movie (old ones at that).

In my book music is music, no Christian no secular. Without a doubt I am positive there is some music that is blatantly wrong and desecrates the art form. The vulgarity in some music and the message in some is just awful. The same can be said about Christian music though. The message can be completely awful and unbiblical in some cases. In many cases their music desecrates the art form. Let me give you a for instance...so we have trouble when Pink Floyd is used in church but if we used a Simon and Garfunkel tune than it is all good? Simon and Garfunkel was a far heavier drug group even more so than Pink Floyd. But, because their music is calm and reflective we give them the benefit of the doubt. In fact we have Christian artists covering their song "Bridge Over Troubled Water" (Michael W. Smith) when in fact that is a song about heroin usage. The bridge over troubled water is heroin and "Shine on silver girl" is the term used for the needle to inject the heroin. Oooops, sorry to burst your bubble on that song. If you attended a Michael W. Smith concert and worshiped to that song...now you know. Look it up. My point is that if you can pull truth out of it though...why not use it?

We must come at things like this with an educated mind. If in fact "All truth is God's truth" than why not utilize the better music out there to draw parallels between that song and what scripture has to say in order to reach people. Are we not fishers of men?