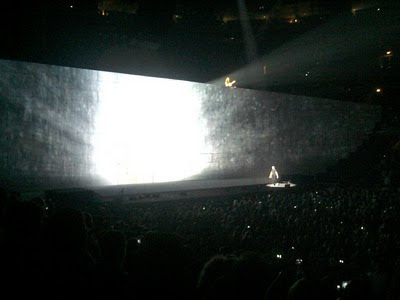 It took me a little while to think about this blog because there was so much to process after seeing, Roger Waters perform "The Wall". A friend of mine and I went to see this performance and let's just say "it met and surpassed all expectations." I suppose there are those who are wondering what a pastor is doing going to essentially, a Pink Floyd concert. I am so done with these kind of arguments that I just don't care what people think about that kind of stuff anymore...so on to other things.

What was amazing is that my friend, Jeff and I were sitting in the nose-bleed seats about an hour and fifteen minutes early. Out of the blue a lady that in an employee of the United Center asked if we would like a free upgrade. Upon accepting it we were escorted to center ice very close to the stage...it was epic! The music got going and on went the concert with Roger Waters performing "The Wall" from start to finish. He did the CD version, not the movie version (there is a difference).

Roger Waters wasted no time in making this a very politically driven performance. He would use much symbolism and pictures of fallen soldiers from many different wars. I recall on the song "Mother" when he sang the line "Mother should we trust the government?" and in big red letters it read, NO STINKIN WAY!" Let's just say the word "STINKIN" was replaced with another word. As the concert continued though the stage crew was bringing out bricks to this massive wall being built. By the time they got to the song "Goodbye Cruel World" the wall was built. This wall spanned the width of the stadium and had to be all of fifty to sixty feet tall. If you know the story of the wall, you know there is a significance behind why the wall was built.

After intermission they continued on with the wall eventually crumbling down which in and of itself was amazing to see. This huge wall falling down without it going into the crowd. From start to finish this concert was complete and total eye-candy. From a huge flying pig with symbols on it that is causing our world to decay to the moving 40' tall school teacher and the MASSIVE projection system...I am confident in saying, "This was the best concert I have ever been to and will probably ever see."

One of the big things that stood out to me though was the haunting music of "Goodbye Blue Sky" and what is now the wall has turned into a giant video screen. While the music was playing, in classic Pink Floyd animation...big war planes were starting to fly onto the scene. When the planes opened their bomb doors, they were not dropping bombs but rather Soviet symbols, Shell oil symbols, and even crosses. This really got me thinking that in fact religion is the worst weapon of mass destruction ever made. It was clear that Roger Waters had no time for religion, government, capitalism or Shell gas stations. I can only pray that someday before he passes that he would really and truly experience the true God and not all these other religions.

If you ever get the chance to see this concert, I would tell you it is a must see. From the tech end of things my friend, Jeff and I were awestruck. The message was really cool, it was very "V for Vendetta" style message. Outside of a glop of beer down my back and the wafts of marijuana (yes some were dumb enough to try and smoke it in the concert) it was VERY VERY thought provoking and challenging. This concert truly embraced all forms of media to make this concert not just a concert but an experience.