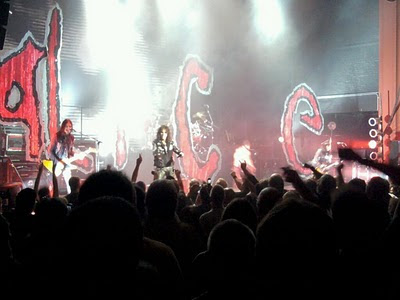 Last night I was able to check another concert off of my "concert bucket list" as I got to see Alice Cooper live at the Riverside in Milwaukee, WI. People have heard me say over and over that he is a Christian. Perhaps you have even seen his testimony on youtube.

The night started with some opening act that is pretty typical in these venues. They have horrible sound and really are just the court jesters to get the crowd warmed up for about forty minutes. After they were done the roadies began unveiling this massive set. Before too long the "Theater or Death" tapestry went up and you could no longer see what they were doing on the stage.

When the lights went down and the music came up...out came Alice singing and sounding better than ever "School's Out" followed up by "No More Mr. Nice Guy". As the night progressed I was simply amazed at how young this guy still looks and acts on stage. The stage theatrics were simply amazing from the guillotine to a huge Cyclops it was total eye candy the whole show. Verbally he would constantly talk about good and evil. I remember his elaborate set for the song "Vengeance" off of his "Along Came a Spider" album. At the end of this song he began you say "REPENT...REPENT OF YOUR EVIL WAYS! YOU HAVE TO CHANGE YOUR WAYS" and it immediately went into "Salvation" which is also off of that album. I believe without a doubt God is using this guy in a very cool way. He connects with the audience in a way only Alice can. Did he get preachy as some might think he may? No, not really. Was he vile and vulgar...absolutely not. There were whole families with little kids at this show. Everything about what he sang was exposing the stupidity of wickedness and choosing the right way. Was it a great night of just live entertainment? Completely! No different than a person going and spending money to sit-back and watch a movie somewhere.

I can see the comments rolling in already both good and bad. The bad ones will probably be along the lines of "see....what kind of show is that if he is not preaching Christ crucified and using scripture? You can be entertained anywhere!" To that I would say "be healed!" It is no different than you paying to see Broadway play or going to see a movie somewhere. Why doesn't anyone ask when someone goes see a movie with Kirk Cameron in it (wait...bad choice...no one sees those). How about just a good movie...why doesn't anyone say "was there a salvation message at the end?" BECAUSE THEY WENT FOR THE SHEER JOY OF ENTERTAINMENT. I really did not expect to see an altar call or bibles handed out as if I was at a Stryper concert. Alice said in his testimony video that he loves to discuss his faith with anyone that asks.

I loved the music, I love what Alice is doing subtly through his music and am glad he is on our side. Yes...I even bought the tour t-shirt! Wear that one to Christian camp and see what happens lol. If you are into theatrics and live shows....this is a must see concert next time he is in town. I will admit though...the whole time I was singing I kept thinking....this guy was on The Muppet Show.

PS...This is an even better link about Alice Cooper! Talks about his Christianity at 8:10