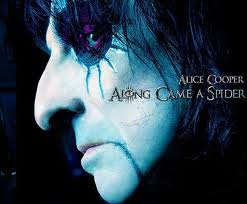 I am so jazzed about this coming Tuesday! I will be seeing someone in concert that I first saw on the Muppet Show back in the day. Of course I am talking about, Alice Cooper. A pastor going to see Alice Cooper? Yep.

I wish I could say I followed him since his days of singing "No More Mr. Nice Guy" and "School's Out". However, I did not really start listening to him until "The Last Temptation" album came out. At the time I was a music supplier for a Christian bookstore in West Allis, WI. It sure was a surprise to me to see his album come in which prompted me to do some research on him.

After some time of research I found out that in fact Alice Cooper was a follower of Christ. What I think is so cool though is that he still does his stage show and all but knows who he is and what he believes. You never know who he is going to be able to reach through doing what he does. I can tell you that he serves as an inspiration to many who think Christianity has to be this way when in fact it can be that way as well.

With a little luck and hoping it would be great to meet Alice Cooper sometime that night!!!

To watch his testimony...click here.