He Shares the Same Story With Many 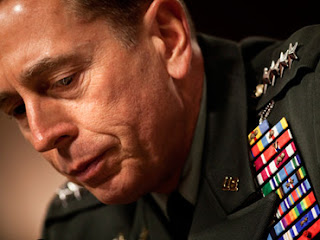 This morning I was listening to a radio show while waiting to get some information on my truck. The talk show host brought up the whole scandal currently unfolding with General Petraeus. Here is the latest from Yahoo! News this morning.

“On the surface, the case so far involves the FBI; a slew of allegedly inappropriate emails (between Petraeus and his biographer, Paula Broadwell; Allen and socialite Jill Kelley; and allegedly threatening ones Broadwell sent to Kelley); the FBI agent who started the probe, who's now being investigated for sending "shirtless" photos to Kelley; and, as reported by the New York Post on Tuesday morning, a child custody battle involving Kelley's twin sister that allegedly concerns both Petraeus and Allen.”

The news broadcaster mentioned that Kelley must be some kind of a siren that these men are sending these inappropriate emails to her. Perhaps they are engaging in an affair as well. This broadcaster went on to say “What is it about Kelley that are drawing these men to her?” I simply responded...she has a vagina and probably listens/respects these men. This was met with some laughter from the other guy I knew waiting. He responded...”You know...I think you have a point.”

Shaunti Feldhahn made an interesting point in her book “For Women Only”. She mentioned that nowhere in scripture does it say, “Women, love your husbands.” Scripture only says, “Respect your husband.” When that respect is gone from a guys perspective...no amount of romance, kind words or fancy lingerie will make his wife desirable. The same could be said of a man who does not show and say, “I love you” to his wife. Does this make his or her actions to engage physically or emotionally with a person of the opposite sex ok? Absolutely not, and I would love to believe that everyone abides by the fruits of the spirit. I am not so naive to believe that, however, as we have feelings, needs, and wants that tend to get satisfied in one way or another.

You see Proverbs 18:22 is a fantastic piece of wisdom literature. This passage states, “He who finds a wife finds what is good and receives favor from the LORD.” When a husband and wife are (as a whole) living unselfish lives and truly wanting to meet each others needs then they find their fulfillment in each other. When the wife isn’t a mom to her husband and the husband isn’t a dad to his wife then there is mutual respect. Their spiritual, mental and physical needs are all met. Would I be so naive as to say everyday is filled with birds singing, children listening, and where everything is peaches and cream? Absolutely not. The good days must outweigh the bad however. What are you doing to make that happen? Notice I did not say what is your spouse doing....what are YOU doing?

Before I was married I would attend the occasional marital teaching, usually at a silent prayer retreat I used to attend. The retreat director and another pastor at a large conference made similar comments when they said, (forgive me for not wording it exactly) “There is always someone else out there willing to meet your mates needs if you don’t.” Perhaps the thought of this might sound offensive, but I think it ought to. There are many men who simply put up with their lives but deep down inside there is a need to be emotionally, spiritually, and sexually fulfilled. The same can be said of a woman. There comes a point in a persons life where, if the needs are not being met they might find it in other places. It may not be to the extent of an affair but it could come out in other ways.

I will not pretend to know what Gen. Petraeus’ home life is like nor the FBI agent’s. Personally I have not heard one news story about his home life which is simply fine. These things ought to remain private. Looking at this story unraveling though a I cannot help but to think what might have been happening. Was his wife talking badly of him? Did his wife always make him to feel like the 5th wheel on a cart? Did she deny or give sex as a control tactic? Perhaps the general was working so much that he hardly took time to be romantic to his wife. Maybe he didn’t make it a priority to simply ask his wife “How was your day”? The excuse from a guy “I am not the romantic type” is a bundle of garbage...a guy needs to at least try and be romantic. I hear from women and men say all the time, “Valentines Day...it’s just another Hallmark holiday.” What they say is one thing and what I hear is another. What I hear is, “My husband/wife hasn’t celebrated that holiday in years, decades, maybe never and I have learned to write it off and become cynical about it...perhaps jealous.” There are so many different scenarios that could be gone over as to why this scandal with Petraeus came to a head.

Looking at this story will make anyone sad. These issues are not limited to just a certain group of people. We must all have our guard up against such dealings. The question as we look at this story unravel is simply this, “If I am married what am I doing unintentionally to take my spouse down this road where this could be the end result?” Perhaps you just got offended by that question “HOW DARE HE EVEN ASSUME!” Have you seen the scandals in the news over the past 3 decades? Some of the most unlikely people have crumbled. The questions we ought to ask daily as a husband or wife are, “What am I doing to keep the love alive? What am I doing to keep the romance going? When we have those less than glamorus days...do I linger on them or do Imove on with a new zest for the day(s) to come?” When we can ask ourselves these questions and safeguard our relationships...we can hope and pray these things never happen to us.  Instead of judging this man we ought to pray for him and all that are involved.
Posted by Bob Adams at 8:06 PM