I Have a Credential! 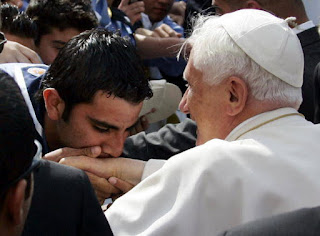 Have you ever noticed at work when someone that was at one time "normal" suddenly turned weird? It happens all the time. Whether a burger flipper is being promoted to shift manager or a factory grunt being promoted to an office position. Now let me clarify that this does not happen all the time. There are many of those who humbly take a higher position and still humbly work at their new position of employment.
Being a pastor, I can tell you this happens in ministry as well. It never ceases to amaze me the amount of people that get their credential to be a pastor (true...you won't find that in scripture anywhere) and end up turning a little weird. I had a relative that was a pastor and it was the oddest thing. I recall plenty of times when we would go out to eat and he would simply flex his "i am a minister of the gospel" card in order to get preferential treatment or a discount (because that is what Jesus would do).
A credential to become a pastor is not a credential to become weird. This has been seen in conversations online and in person. It does not mean you have to become even more fluent in Christianese. A piece of paper that gives you a title does not mean you can stay behind your desk and HOPE the church will grow. In fact...if you are reading this and need a little persepective on the "pastor", let me point you to chapter 5 in "Pagan Christianity" by Frank Viola and George Barna. The role of the pastor as we know it is not necessarily a bad thing. However...power tripping pastors can really destroy a church body.
I will say this...if anything, what a credential should cause a person to do is to serve all the more. It should cause a person to be approachable and less judgemental. I was fortunate enough to get credentialed around the time the "ragamuffin" idea/movement came out and quite honestly between that and seeing poor examples really kept me in check. I will often times joke around stating that the best thing about being "clergy" is that you get killer parking spots at the hospital.
A credential to be a pastor should humble a person. Back while I was a youth pastor I remember the kids always referring to me as just Bob. The adults would constantly point out to them that it is PASTOR Bob (thus the title PB). This never bothered me but it must have been an issue for the senior pastor at the time. To have that title must have done something for people...I simply remember that just a year before I was "PASTOR" I was a factory grunt and as blue collar as they come. To be honest with you...I prefer to be viewed as that. A blue collar kind of guy who happens to be a pastor rather than, a pastor who is trying to be normal.
Posted by Bob Adams at 10:13 AM