Friend of the Devil is a Friend of Mine 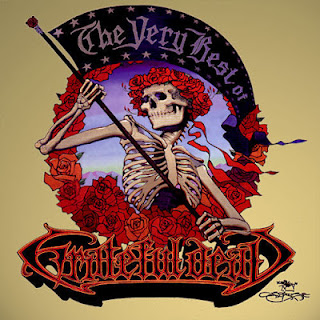 The Grateful Dead is one of those bands that to a person who doesn’t know their music might write them off as “METAL”! When Tracy, and I began dating she assumed Pink Floyd, Phish, Grateful Dead and others were hard rock or metal. It is funny because I began playing “Us and Them” by Pink Floyd in the car. She actually enjoyed them. This can be the common misconception however based on these bands logos, t-shirts and overall branding. Why do Christian's equate skulls and skeletons to hard rock or evil?
In Blair Jackson's book on the Dead, Garcia is quoted as saying: "One day we were over at Phil's house...He had a big dictionary. I opened it and there was 'Grateful Dead', those words juxtaposed. It was one of those moments, you know, like everything else went blank, diffuse, just sort of oozed away, and there was GRATEFUL DEAD in big, black letters edged all around in gold, man, blasting out at me, such a stunning combination. So I said, 'How about Grateful Dead?' And that was it."

The dictionary entry reads along these lines:
GRATEFUL DEAD: The motif of a cycle of folk tales which begin with the hero coming upon a group of people ill-treating or refusing to bury the corpse of a man who had died without paying his debts. He gives his last penny, either to pay the man's debts or to give him a decent burial. Within a few hours he meets with a travelling companion who aids him in some impossible task, gets him a fortune or saves his life. The story ends with the companion disclosing himself as the man whose corpse the hero had befriended.(Funk & Wagnall's Dictionary).
Though I do not necessarily condone the Grateful Dead's lifestyle (you know what I mean) I do find it interesting that one of their songs that made their "best of" album (see picture) really has a Christian title.
The song “A Friend of the Devil” was introduced in concert in 1970. Think about it...everyone throughout scripture especially during Jesus earthly ministry was a person Jesus loved, and died for. From the Pharisees to Judas they were a friend of the Devil whether they knew it or not. What is quite ironic is that Jesus died for them as much as he died for you and me. He called them...you....me.....a friend! John 15:15(NIV) I no longer call you servants, because a servant does not know his master's business. Instead, I have called you friends, for everything that I learned from my Father I have made known to you.
It’s funny but if Jesus loved everyone. If Jesus associated with the prostitutes, tax collectors, etc. We ought to as well. Truly if Jesus loves everyone and even calls us his “friend.” Would it be safe to assume that “A Friend of the Devil” really is a friend of mine? I think so.

Love your neighbor as yourself.
Posted by Bob Adams at 9:57 AM