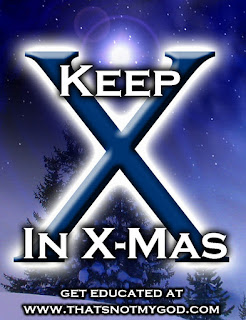 What? Surely now I have fallen off my rocker by making a graphic that says, “Keep “X” in X-Mas.” Well…that really isn’t the case. You may be asking "What is Bob and 'That's Not my God' doing?" I am choosing to join in the celebration of this sacred holiday with those from centuries ago in the purest fashion by calling it “X-Mas” this year. Don't worry...I am not really going to call it that in conversation...I still love calling it Christmas.

I realize this makes Christians downright militant when they see this. However…I could explain but why reinvent the wheel? Here is Christian author, R.C. Sproul’s writing on this very topic, which I have stood by for years.

“The simple answer to your question is that the X in Christmas is used like the R in R.C. My given name at birth was Robert Charles, although before I was even taken home from the hospital my parents called me by my initials, R.C., and nobody seems to be too scandalized by that.

X can mean so many things. For example, when we want to denote an unknown quantity, we use the symbol X. It can refer to an obscene level of films, something that is X-rated. People seem to express chagrin about seeing Christ’s name dropped and replaced by this symbol for an unknown quantity X. Every year you see the signs and the bumper stickers saying, “Put Christ back into Christmas” as a response to this substitution of the letter X for the name of Christ.

First of all, you have to understand that it is not the letter X that is put into Christmas. We see the English letter X there, but actually what it involves is the first letter of the Greek name for Christ. Christos is the New Testament Greek for Christ. The first letter of the Greek word Christos is transliterated into our alphabet as an X. That X has come through church history to be a shorthand symbol for the name of Christ.

We don’t see people protesting the use of the Greek letter theta, which is an O with a line across the middle. We use that as a shorthand abbreviation for God because it is the first letter of the word Theos, the Greek word for God.

The idea of X as an abbreviation for the name of Christ came into use in our culture with no intent to show any disrespect for Jesus. The church has used the symbol of the fish historically because it is an acronym. Fish in Greek (ichthus) involved the use of the first letters for the Greek phrase “Jesus Christ, Son of God, Savior.” So the early Christians would take the first letter of those words and put those letters together to spell the Greek word for fish. That’s how the symbol of the fish became the universal symbol of Christendom. There’s a long and sacred history of the use of X to symbolize the name of Christ, and from its origin, it has meant no disrespect.”

So join me as we celebrate our Savior’s birth this “X-Mas” and live the life worthy of the calling!
Posted by Bob Adams at 9:36 PM