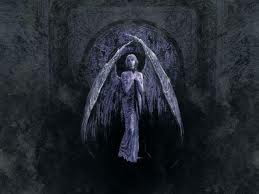 This morning as I was driving to church in order to mop the floor after the epic amounts of salt used this winter on our sidewalks (here’s to not having to shovel anymore this year) I saw something quit odd for Waupaca. What could it be you might ask? Was it a Wal-Mart? NO! A Starbucks? NO! A Hispanic or black person? NO! (although I saw my first Hispanic and black person in a week when I got to Milwaukee today…come on Waupaca we need some diversity). What I saw was a fully decked out goth! I was so happy when I was about 5 blocks from the church and I saw this lady in her 20’s maybe 30’s waiting to cross the street with her long poofy black trench coat on with a black monk like hood and Goth boots that would make, Skot from “Leper” blush. I couldn’t tell but from what I saw she even had the black lipstick and white make-up going on. I just knew that this was not a cute concert make-up job for her but rather her lifestyle. Now to some people and Christians the very term “Goth” conjures up thoughts of kids that used to play doom now running around shooting up their schools. Some might think because they wear dark eye-liner once to a concert that they are, Goth. I get a kick out of the, Aeropostale and Abercrombie and Fitch kids that put on mad amounts of black eye make-up to a concert and think they are Goth. I am quite sure a Goth throws up when they walk past those stores. Perhaps when we hear the word "GOTH" some may even think, Marilyn Manson! That’s not Goth…let me explain.

Marilyn Manson? Shock rock no different than, Alice Cooper. Our society has made, Lady Gaga out to be, Madonna 2.0 well the same can be said of, Marilyn Mason being, Alice Cooper 2.0. One person put it this way about, Marilyn Manson…Looks: He tries to look Goth, but no real Goth dresses that way. Personality: Goths differ wildly in personality, but the fact that he seems to love the limelight suggests that he's not Goth. Music: Definitely not Goth in sound or lyrics, he's much more metal, and much angrier than gothic music. Sisters of Mercy, Bauhaus, Siouxsie and the Banshees - those are some real gothic bands. So, in summation, no, he's not Goth. Real Goths don't like the fact that everyone thinks he's Goth. What about the kids that shot up Columbine? Not Goth.

If you would like to meet some of the best gothic people I know? Join me at Cornerstone Festival and I will introduce you to some great Christian goths, an awesome ministry called, "Asylum Ministries" and bands (SAVIOUR MACHINE AT CORNERSTONE....YES!). To get back to the issue at hand and why I was happy to see this person in Waupaca…it means we are seeing more diversity! Waupaca(ites) are accused of having a cow in every yard from the big city folks. Truth be known, I used to say the same thing about people in Waupaca…until I moved here. These kinds of sub-cultures should not be frowned on or even shunned in any community. Instead it should excite us that the world is coming to our city and we get to see more people from all walks of life. From a ministry/pastor viewpoint? This means we can ASSUME THEY ARE GOING TO HELL AND GET THEM SAVED BECAUSE THEY ARE GOTH!!!! NO…..WRONG ANSWER! Instead it means we get to meet people with different viewpoints and learn a few things. I don’t know where this person is spiritually and certainly cannot make an assumption just by looks. Instead I pray someday I will be able to meet this person and enjoy some conversation about our faith journeys.

btw...some of my favorite music I listen to are by some of the finest Goth artists out there (oh and their Chritians!). Check out Saviour Machine and Leper.