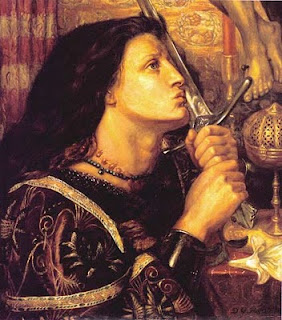 Joan of Arc told the General she would lead the way over the wall for 3,000 French knights in battle. The general replied, "Not a man will follow you." And, in return, Joan of Arc said, "I won't be looking back to see if they're following me."

This Sunday night I will be attending “Church at the Pub” once again. A ministry like this one really didn’t get the popular vote when first announced. The only ones that were really excited were the ones that could hear my heart in person. I had one Christian magazine tell me they would never do a story on it. There were comments made like “aren’t you afraid you will lose your ministerial credentials?” I cannot begin to count how many times I was asked “are you prayed up?” My favorite was “we will be praying with you that the pub gets shut down because of what you are doing there.” It seemed more people were concerned for my well-being and those coming with me than those we were and still are trying to reach. It is not our intention with “Church at the Pub” to shut it down.

When God lays a new ministry on your heart or an idea to try something…you have to go for it! There is a blues standard called, “You Gotta Move.” My two favorite versions are done by Glenn Kaiser and Aerosmith. There is one line that says, "But when the Lord gets ready you've got to move”. This may not always be the most popular thing to do, in fact it may be frowned upon. For me, “Church at the Pub” seemed like a no brainer…it just makes sense that this is something Jesus probably would have done. I know it is a divine idea because I never grew up with the bar scene and don’t understand it. What I do know is some of the patrons need the love of Christ as much as the person in church.

So…what do you want to do for God? What’s holding you back? Even if you have to go at it alone…will you be like Joan of Arc and say, “I won’t be looking back to see if they’re following me.”?

btw...that magazine ended up doing a story on it in their Christmas edition.
Posted by Bob Adams at 8:40 PM