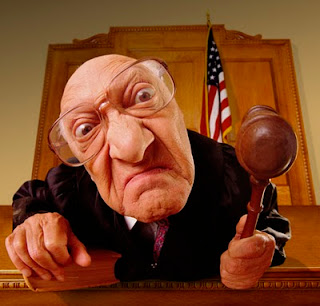 Someone used this verse on me with my "That's Not My God" ministry so I thought I would educate the young man...this is what I posted about "judging".

Matthew 7:1(NIV) "Do not judge, or you too will be judged." How many times have you heard people use that and think, that cannot be what it means? The Greek word for judge is "Krino" and used 3 different ways? Which way is Jesus using it?

Look at Titus 3:12(NIV) As soon as I send Artemas or Tychicus to you, do your best to come to me at Nicopolis, because I have decided (krino) to winter there. Krino "to decide"-make decisions. Is he saying, "Do not make decisions" No.

How about John 18:31(NIV) Pilate said, "Take him yourselves and (krino) judge him by your own law." is Jesus saying do away with court if someone robs you? No.

How about I Corinthians 4:5(NIV) "Therefore (krino) judge nothing before the appointed time; wait till the Lord comes. He will bring to light what is hidden in darkness and will expose the motives of men's hearts. At that time each will receive his praise from God." This Krino is to bring to light...Only God does this because it involves exposing darkness motives of people's hearts

Lastly, (same Krino as I Corinthians) how about John 7:24(NIV) "Stop (krino) judging by mere appearances, and make a right judgment." When Jesus says, "Do not Judge" it means stop the third kind of Krino and go back to the first.

So back to Matthew 7:1...he is not saying don't make any decisions, he is not saying get rid of the court system. He is speaking of a way in which we evaluate, critique, and draw conclusions about others. It is to confuse a person's action with their essence (at the core, who that person is).

Couple of ways we can define this. To judge than is to raise you up by lowering another Make a conclusion by lowering them-point out all the ways they fall short. Judging is to critique and attack the very motives of their heart so that in lowering them I raise myself up.

To judge is to confuse action with essence and identity. The I Corinthians passage is God's job. This basically looks like this, instead of saying "that thing they did, that is pretty messed up." To judge would sound like this, "They at their core are less than, not good enough, off, deeply off center."

You ever do something dumb? We all have. Have you ever had someone instead of just pointing out some dumb thing you did once, you felt they were pushing your whole self down on a soul level and sort of raised themselves up?

Judging is when you assume divine responsibility for evaluating the worth and value of another.
Posted by Bob Adams at 8:02 PM