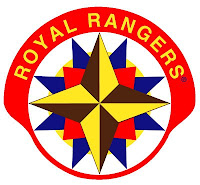 There are times in everyone's life that you remember very well. For me, a time was when I got saved when I was 9 years old. I was raised in an Assemblies of God church where they had a great program for boys called, "Royal Rangers." I guess the best way for me to describe what Royal Rangers is, is a faith based Boy Scouts program. Our group met every Wednesday night at our church. My dad was a commander along with a great guy, Emil Heins.

When you are a 9 year old in this program you were called a "Pioneer" and were officially allowed to go to what was called, "Pow-Wow." These days it is referred to as "Summer Camp." Either way it is a great weekend for the kids from 9 and up. Just 3 short years later I would attend the first National Camporama held at Eagle Rock, MO.

It was my first Pow-Wow and the speaker was Johnny Barnes who was the founder of the Royal Ranger program. After the service I gave my heart to the Lord at the altar call that night. I remember that so well because of the great speaker and God began to do a cool thing in my life. I stayed in Royal Rangers until I was 17 or 18 years old while doing the youth group thing as well. It is a great program!

This week a great thing happened to me, a truly humbling experience. The coordinator for the Royal Ranger program for our state asked me if I would be the speaker at the 50th anniversary Pow-Wow..."Summer Camp" in June 2012. This is truly an honor....this goes to prove that you never know what God is going to ask you to do...just remain available.