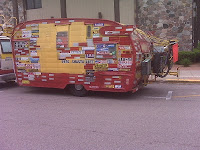 Yesterday as I was cruising in Waupaca which takes all of 10 minutes to get from one side of town to the other I saw this vehicle and trailer parked just off Main St. After living in Milwaukee for 29 years this car reminded me of "The Milwaukee Religious Wagon" which does have its own facebook group. This car really got me thinking how unfortunate it is these things get the label of "Christian" and have to be associated with the "normal non-crazy Christians."

Let me expound on this point. My brother Jake and I worked in a factory together for quite a few years. People on the plant floor found out that both of us were working towards being a pastor yet 90% of the workers enjoyed working with us regardless of what we were doing. The other 10% were just kind of in their own world and did not not like us but just did their own thing. I would have to say we were far more effective in reaching people than some. By some, I mean the ones that got hired through the temp agency that worked at the factory. Some of these "Christians" would come in cranking their Christian music through their headphones, have Jesus bumper stickers on their toolboxes and tell people how bad they were for doing certain things. Both my brother and I got fed up that we had to be associated with them.

Here's the point. I think....okay I know a person does more damage than good when doing these kinds of things. The Milwaukee Religious wagon is a joke and that is what people view it as. This person with bumper stickers all over it from Christian sayings to pro-life stickers everywhere...come on, don't they see they are destroying the body of Christ? Those stickers in and of themselves are not bad when you use one, maybe two. I think it is out of control when from the looks of it, they are using these stickers to hold this trailer together. The overzealous "Christians" with all of this junk on their cars and ones that are just mean to non-believers...you are a joke and that is how people view you. Christians may see these as Pharisees.

I read through the new testament and I don't see where Christians (including Jesus) were insulting and obnoxious to their audience....certainly not to unbelievers. Really the only time sarcasm and pointed statements were made was when addressing Pharisees. That is why I have such a difficult time and perhaps throw-up in my mouth a little when I see quirky church signs like "Stop, Drop, and Roll Won't Put Out the Fire in Hell" or "Eternity...smoking or non-smoking...your choice" etc. They disrespect peoples intelligence and turn people away before they even set foot into a church.

These kind of people need to stop what they are doing so us normal Christians don't get lumped into what the crazies are doing.